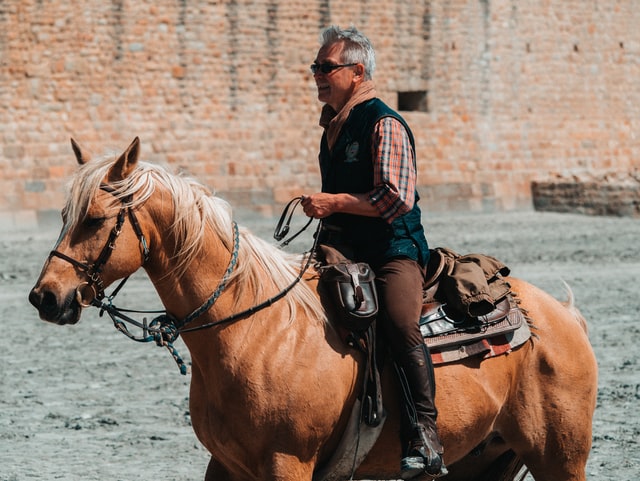 A Comparison of English and Western Riding Styles

English and Western riding styles are the two most common styles in North America. They are very distinct methods of riding, both in practice and appearance. Although they have many similarities, there are a number of differences that make these two riding styles quite different from one another.

Apparel for both English and Western riding have their own components, including specific pants, boots, and headgear. Each of these items can be found anywhere you find equestrian apparel for sale.

The standard English riding apparel has a more formal style than Western. Riders wear fitted riding jackets, jodhpurs, a helmet or hunting cap, and boots. The jodhpurs, or riding pants, are ankle-length, usually with black elastic stirrups sewn in to keep them tucked into riding boots. These pants typically have fabric on the seat and inner thighs that helps prevent the rider from slipping on the saddle. Non-show attire consists of the same style of pants tucked into boots with a comfortable shirt.

Western riding apparel is much more casual than English attire. Everyday Western apparel consists of jeans, riding pants, or chaps, and Western style, or cowboy, boots. The jeans or riding pants worn by Western riders are cut to go over the boot as opposed to tucked in.

During shows, the typical Western uniform is a collared shirt and black show pants.

English saddles are lighter and take up a smaller amount of space on the horse’s back than a Western saddle. They have little to no decoration, and the rider’s contact with the horse is through the reins.

Western saddles take up more space on the horse’s back, which more evenly distributes the rider’s weight. They also often have decorative features, such as stitching.

The use of reins and the method of steering highlight the biggest differences between English and Western riding.

In Western riding, reins are held in one hand and are used lightly, while the rider uses his or her body positioning to steer the horse.

In English riding, the reins are the primary means of steering. The reins are held in each hand and allow the rider to communicate turns, starts, and stops with the horse by pulling on the bit.

Although English and Western riding styles have their differences, one is not necessarily harder to learn than the other. Choosing the style that is right for you will depend on preference, purpose, and availability in your area. Whichever you choose, the information here will prepare you for the basics of each style.

Which Weather Stripping Should You Choose?

How To Get Your Home Ready For Winter.